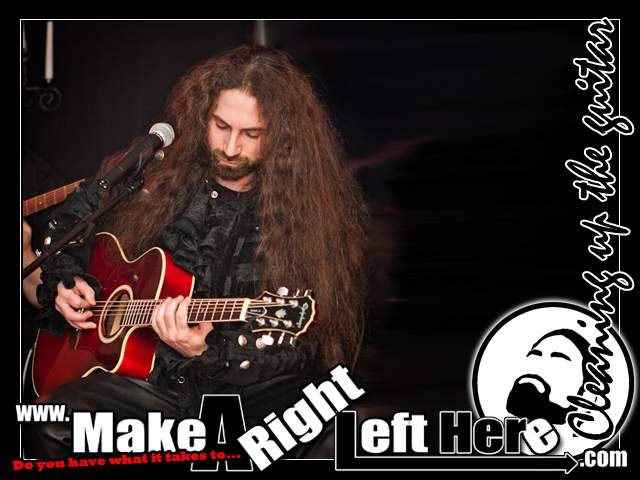 Cleaning up the guitar;

Ah my guitar gently weeps. Who am I kidding, my guitar wails out from burning souls being pulled from their peace and thrown into a raging fire… MEEEETAAAALLLLL!!!! So, I’ve been working on an acoustic album. Wow, now that is a crazy segway! And crazy as in the chimpanzee riding one either. I’ve decided to push forward on an album that will have versions of my much more heavier songs converted to acoustic. Some off the first album, second album that is being finalized and also a few older songs that I’ve not touched since the days of TENEbRAE.

I’ve come up with a nice set list. Originally I was going to play a live acoustic show and record it to have “Altayon in the Raw” set and done in one shot. Now I am in a situation where I can just record it and take my time with it. By time, I mean set a date when I should be done and call it a week! Well, a few months. I give the weekends to my projects, and the week to my company. I’ve already finished setting up 2 of the 10 songs. So we’ll see what happens from there. I’m only debating if I should have piano and strings on this album or just two acoustic guitars and a bass with all the vocals.

So, I am cleaning up my guitar to record again. I have no recorded since 2007. This will be my first time sitting to record something nice in five years. I have to set a goal to record a new album once a year or what is the point? Time to make goals and get things going. The life of an entertainer is about being entertaining. Even for myself. So when you plan things out always be aware of your time restraints. Set SMART Goals and make life happen. I’ve be at this thing called music since I was about 9 years old. Which is a long time ago. I really have not been playing, but once I played live again on Saturday the 14th of April, I was hooked!

2 thoughts on “Cleaning up the guitar”

Do you have what it takes, to make a right left here... with a comment? Cancel reply

This site uses Akismet to reduce spam. Learn how your comment data is processed.